Why Do Catholics Pray The Rosary?

The recitation of the Holy Rosary is arguably one of the most beautiful devotions in the Catholic faith. The month of October is set apart as the month of the rosary. Where did the rosary come from? This article will not only dig into the reason why Catholics pray the rosary but, it will also highlight several aspects of the rosary including its history and structure.

It is also worth mentioning that most protestants have always misunderstood the rosary with some arguing against its relevance in Christian faith. Read on to understand more about the rosary and its spiritual benefits.

The Origin of the Rosary 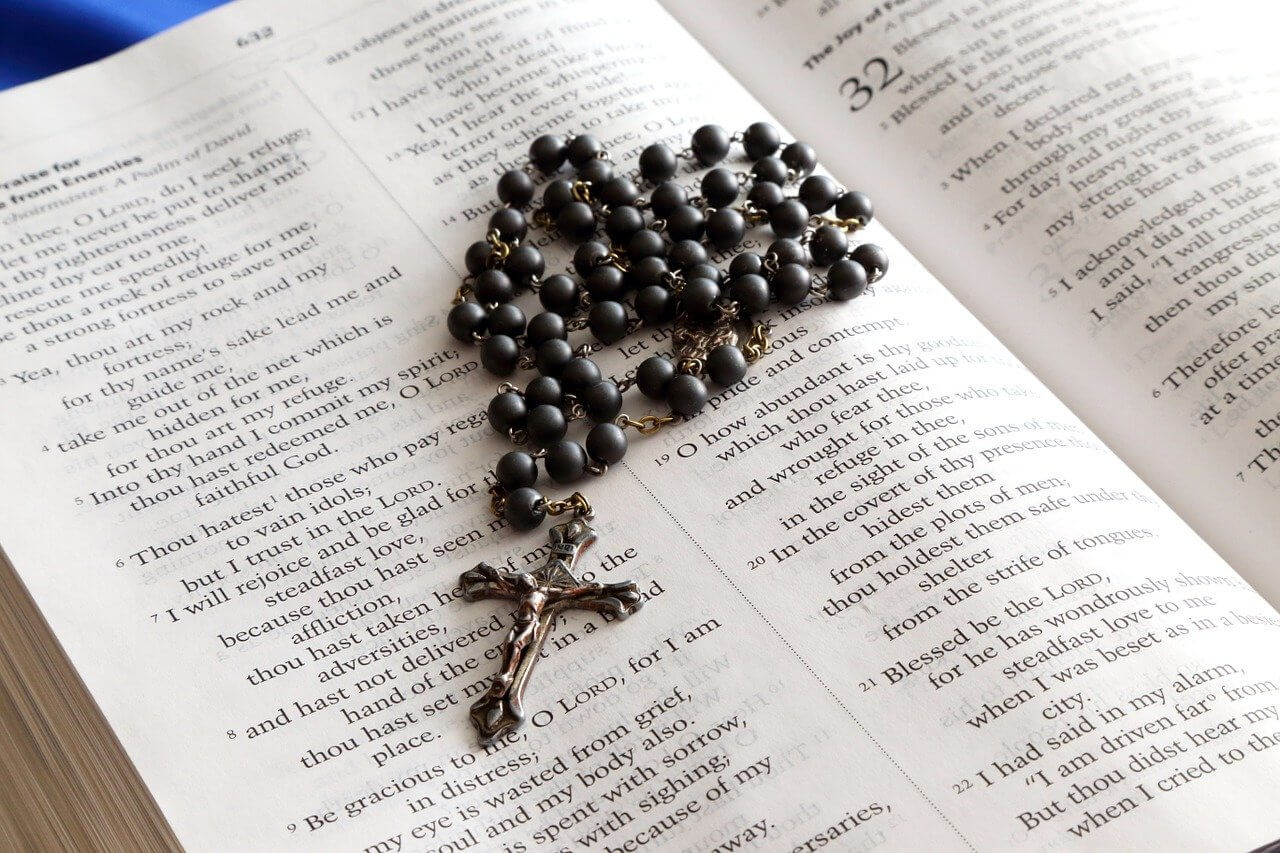 The rosary as we know it today can be traced back to the life and preaching of St. Dominic. Also referred to as Dominic of Caleruega, Saint Dominic is the founder of the order of preachers or the Dominican order. The principle and foundation of the Dominican order rest on the Rosary of Mary.

There are some Catholics who believe that St. Dominic was asked by Mary, the mother of Jesus to pray the rosary in France to enable him at the Albigensian Heresy.

While monks were known to practice the Divine Office where they recited all the 150 Psalms within a single day, the lay had the rosary as a meditation tool.

The rosary was convenient for the lay as many of them could not read. The short prayers such as Hail Mary and Our Father were simple to memorize and the laity would recite them effortlessly in their lives.

As they recited the Our Father prayers, the laity used prayer beads which are conceptually like the rosary beads used today. However, the use of prayer beads was also a practice that dates as far back as the ancient world.

Some of the cultures who used beads were even non-Christian, something that wasn’t strange since bead was a simple term used in Old English to mean prayer.

Before being called the rosary, the beads were first called Paternosters, a term derived from the ‘Our Father’ prayers that the faithful recited. It was not until the 12th century that the use of the prayer beads for Ave Marias or Hail Mary prayers was first recorded.

The term rosary was adopted much later. Meaning a garland of roses, the rosary was symbolic of Our Lady who was represented by a rose. As time passed by, the form of the rosary was changed to include other prayers including Glory Be’s and some meditative mysteries.

As it is today, the rosary has become an indispensable tool to help Catholics in prayer and meditation.

How is the Rosary Structured?

There are different types of rosaries being prayers today but the common one is the Dominican rosary. You may hear of the Franciscan rosary and probably other forms of rosaries.

In terms of the order, the rosary begins with Apostle’s Creed, followed by one Our Father, and thereafter three Hail Marys. The faithful then recite Glory Be before moving on to the Mysteries (Joyful Mysteries, Sorrowful Mysteries, Glorious Mysteries, and Luminous Mysteries).

This rosary structure enables those praying it to derive some beautiful spiritual benefits out of the devotion.

Why Do Catholics Pray the Rosary? 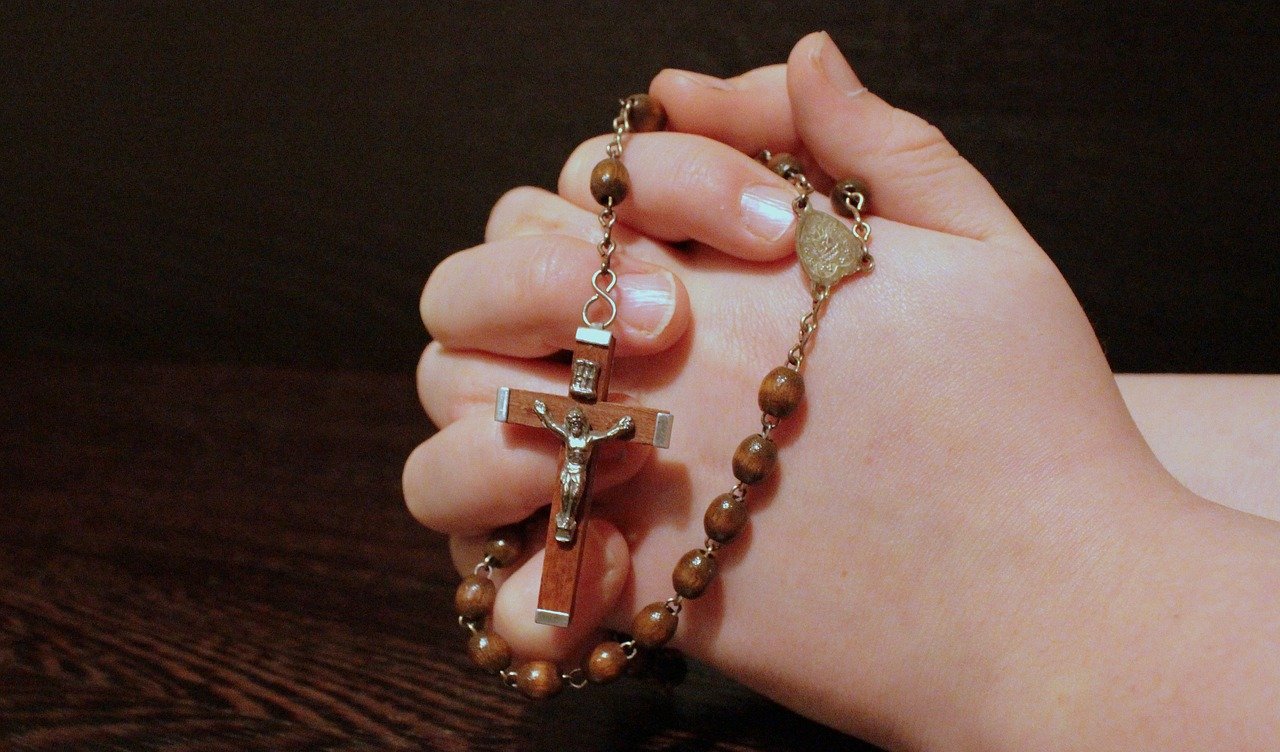 Scripture and tradition have both shown a strong foundation to the devotion of Our Lady in the Catholic faith.  Among the devotions that Catholics practice is the rosary. Most protestants see the recitation of the rosary as idolatry hence denounce it.

In the words of Pope Pius XII, “the rosary if the compendium of the entire gospel”. Each of the decades recited relate to an incredibly significant period in the history of salvation.

Even though the rosary has several repetitious prayers, it is still powerful and cannot be dismissed as being meaningless. In its format, the rosary cultivates both mental peace and an interior space conducive for meditation.

Reciting the rosary brings Catholics closer to the incarnation, Christ the person and draws them into the relationship that God himself has built with his creation.

Therefore, on one end, the rosary is Marian as far as prayers are concerned but Christocentric in terms of devotion. Comped to non-meditative prayer, the rosary nourishes the spiritual and interior life of a Christian.

Having God in our hearts is one of the most peaceful and refreshing feelings you can ever have. However, that cannot happen until and unless you invite him. Praying the rosary allows him to enter the silence of our hearts and commune with our spirits.

“You must love the Lord your God with all your heart, all your soul, and all your mind.”

To experience this love, we must create room for him. Only the rosary can do this perfectly. It creates both room and time. All you need to begin with is just 15 minutes a day.

Rosary is a collection of prayers and just like any other prayer, it is a lifeline to God. In 1571, the then pope- Pope Pius V, put together the Holy League which in essence was a group of Christian forces that served as a defense against the Ottoman Empire invasion.

The Pope called on Europe to pray the rosary before the war with the Ottoman fleet in the Ionian Sea. True to the faithfulness of God, the prayers were answered, and the Holy League defeated the Ottoman forces.

To commemorate this great and victorious day, the Pope established the feast of Our Lady of the Rosary also known as Our Lady of Lepanto.

Therefore, praying the rosary is particularly important and has a lot of significance to the Catholic faithful, including children. From its history to the structure to the reasons behind its observance, the rosary has a special place in the church. It also gives the believers the discipline of connecting with the Father and the son Jesus Christ.

4 thoughts on “Why Do Catholics Pray The Rosary?”